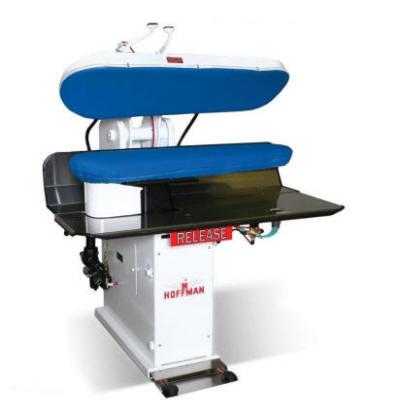 How a shoulder injury changed the clothing industry

Many of you will have heard of a Hoffman steam press. This is used to press different parts of jackets and trousers.

In the early part of the 20thcentury garments were pressed with hand held “Goose” irons that were heated over a gas fire. They were very heavy to lift.

In 1904 New York Adon Hoffman was a hand presser who had injured his shoulder and was unable to lift the heavy hand iron.

He had a “eureka” moment. Adon had the idea of the heavy iron being on a form of pulley where he could pull the iron down onto the garment with a foot pedal.

Thus, the Hoffman Pressing company was formed and the rest they say is history. The concept of steam pressing remains unchanged except that steam presses now come in all shapes and sizes with automatic settings. The steam press is still called a Hoffman press.

The photo is a modern Hoffman utility multi press.